Adoption is not just for dogs and or cats...
Here's Cocoa! 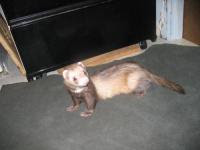 Cocoa and Bianca were privately bred sisters who are proud to be part of the ferret adrenal study. Bianca has now passed away leaving Cocoa behind. Although a senior now at 6, she is still a feisty girl and loves to play.  She resides in Washington State.


Here is another great Washington State winner looking for a home on Petfinder... 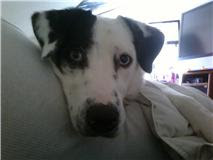 CONTACT: i_worshipa7x@hotmail.com Dominio is a 1 1/2 year old 40 lb. sweetheart looking for a loving forever home. He is deaf and knows hand signals for sit, lay down and is working on stay. He loves playing with other dogs at the dog park and cuddling with his family. He's a perfect boy when he goes to Petco to get his nails clipped. Would you consider being his forever family? Domino would be best in a home without toddlers who might not understand Domino's deafness.
Adopt a MOVIE STAR... MINI AUSSIE Dexter 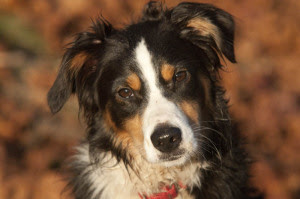 Dexter is one of the MARS Mini Aussies that was used in filming Marley & Me 2, release date June 2011. Mr. Dexter is for a serious Aussie fan only! At about 17 months old, he's super smart, high drive, and has potential with a capital P. Dexter easily learns anything asked of him, has excellent obedience skills, and quite a repertoire of tricks. But that's not enough for Dexter - he craves positive training sessions and would excel in Rally-Obedience or Agility. Dexter needs a lot of exercise daily, as well as mental stimulation. He easily hikes for two hours with other dogs, then after a nap - he's good to go again! Unfortunately Dexter's drive was stronger than his body and he recently had corrective knee surgery for a severe luxating patella. Dexter is on the road to 100% recovery, and he'll be able to run, jump and play with ease once his knee is fully recovered. He is already back to hiking an hour an hour a day. Dexter will also be able to do agility starting in September 2011, and his knee should never bother him again. Dexter loves to run with other dogs, or play fetch outside. He has high food and toy drive which is excellent for training! He can also settle nicely and amuse himself around the house, or cuddle up and watch a movie with you. Dexter currently lives peacefully with several other dogs, and hikes with other dogs with no issues. Dexter has been to doggy daycare and he has his own fan club among the staff. Dexter is a fantastic dog, who will make anyone proud - but sadly Dexter does have a few issues. He has moderate separation anxiety, meaning he cannot be left alone for long periods of time. He can handle up to one hour left alone in the house with the other dogs before he starts to get anxious. He is fine if he can ride around in your vehicle with you. Therefore, shopping and dining aren't a problem if Dexter is hanging out in the car, which is great - until the hot summer months. If you are interested in adopting Dexter please consider that he will need to go to work with you, or to doggy daycare when unable to be with you. Dexter is crate trained and is quiet in his crate in the care. Hes fine crated at home or at the office as long as you are close by. Since Dexter likes to go everywhere with his foster mom, we have worked very hard to make sure Dexter is polite and well behaved in public. He can even hold a long down-stay in busy public places. Dexter shows a keen interest in cats. He has learned to not get too close but he is not to be trusted around cats who are not totally comfortable around dogs. Dexter is also wary of young children - when they run fast it startles him and he barks at them. Dexter happily takes treats from calm, quiet kids, but he would not be happy in a home with kids, or where kids are frequent visitors. Dexter would do best in an active home that has a keen interest in dog training. He is a VERY rewarding dog to work with!

The adoption donation is $250. All dogs are microchipped, spayed or neutered, up to date on vaccines, and accompanied by all available vet records. Each dog comes with a martingale collar, nylon lead,backup slip lead, clicker with instructions, stainless steel collar ID hang tag, and a Fido's Farm $25 Gift Certificate. Post-adoption support is also provided.   Wow! What an amazing dog!
Petfinder is full of wonderful pets just waiting for you!  Adopt today!