Here are Ryker's baby pictures from Jamie and Dean / Makana's Mini Aussie's.  It was their first litter and they hit one out of the ball field. Every puppy show quality and all adorable! 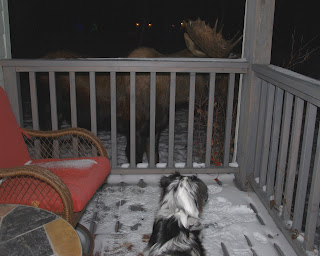 And for all you Alaskans in the know...yes, ...don't feed the moose. They can become a nuisance.  I do not make a habit of this, but it was Christmoose after all!

All I want for Christmas is a Moose! 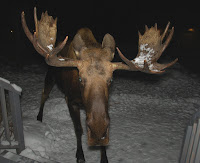 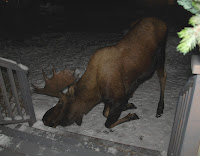 So we thought  we would work backwards for a bit and share some of our holiday happenings. On the eve of the 25th of December we had an unexpected guest. Ryker let me know he was lurking outside the house and that explained the banging noises at the side of the house where my Clematis grows up the wall on a trellis....
We have had a young bull moose growing up here in the park that surrounds the neighborhood. He is full grown now and 3 years old. Ryker and I went out on the front porch and greeted him. We watched and took pictures for quite a while and as he grew used to us again he came closer to check things out. With the porch rail between us he let me pet his nose and feel his rack. I fed him a Christmas apple!
He came around to the front door and I fed him by hand the last of my garden carrots that were going bad. I threw some on the ground and he got down on his knees to finish them off.  Ryker was unsure about the whole thing and growled and grumbled.
We have lot of moose around and I would like him to remain calm around them rather than barking and upsetting them. They can be dangerous  if provoked.